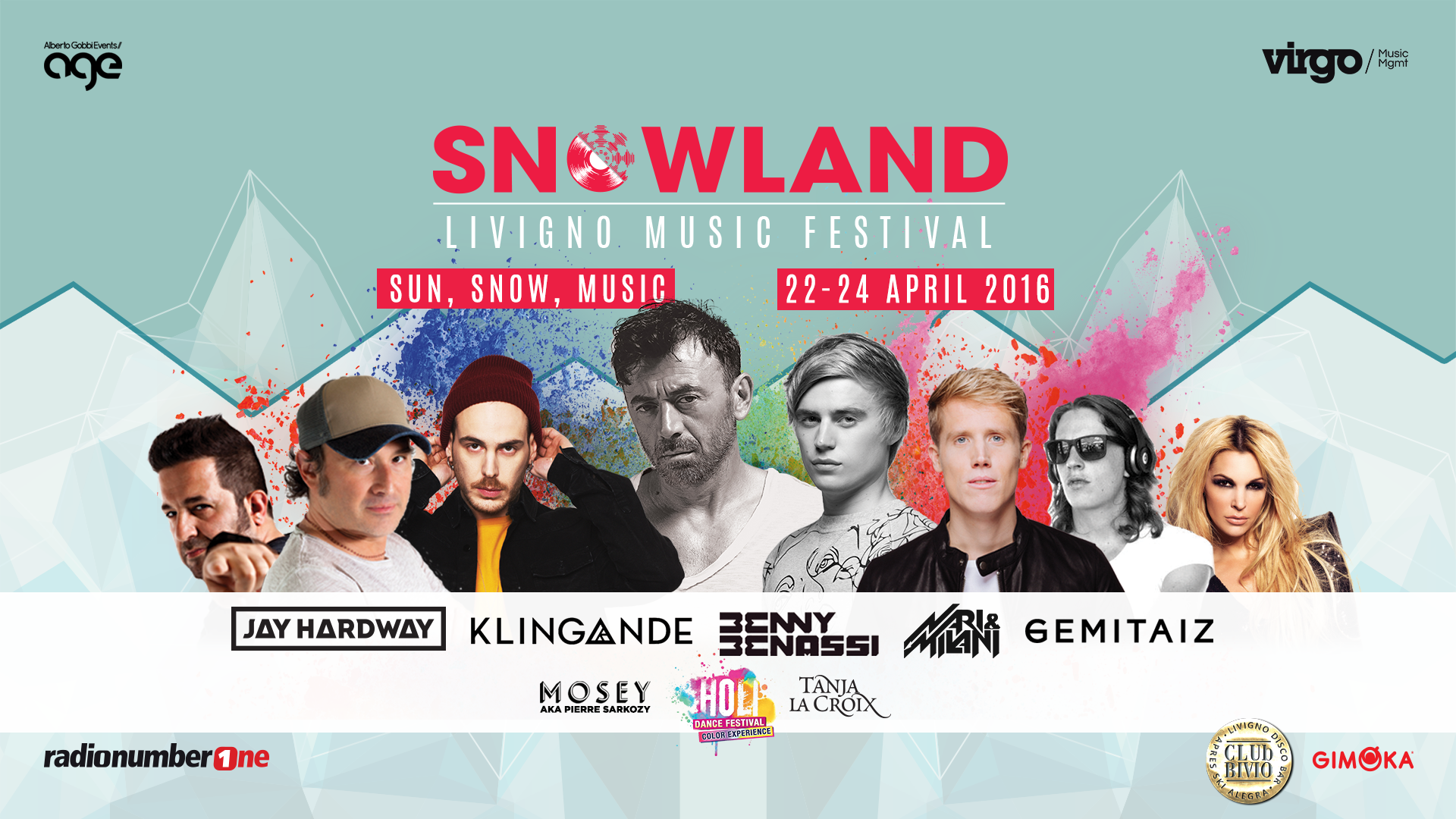 The most rhythmic winter of the Alps is happening in Livigno at the Snowland Music Festival, the open air season-closing party with best music – loads of fun is guaranteed on top of the mountain

From the 22nd to the 25th of April international DJ´s will present the best of electronic music – during the day on the slopes and during the night in Livigno´s best afterparties in clubs and pubs around town.

The DJ´s will be playing on the slopes of Mottolino Fun Mountain as well, at the open air area next to the Alpen Village Hotel close to the Teola slopes and afterwards in some of the best clubs the Alps have to offer, like the Bivio Club, Miky´s Pub, Marco´s and Space.

The program includes the inauguration of the festival on April 22 in the evening with the welcome party at Space and on April 24 we are on the Camanel di Planon on Mottolino Fun Mountain, in the afternoon and evening at the Alpen Village open air location, and again the after parties are at the Bivio Club, Miky’s, Space and Marco’s .

DJ AT THE EVENT:

Benny Benassi is the successful of a DJ who became the best known Italian DJ in the world. His first international success was “I Feel So Fine” launched in 2001 under the name KMC, sung by Dhany. The single that has consecrated the world, “Satisfaction”, arrived shortly after, and allowed him to reach second place in the singles chart in Britain. In 2007, he released the single Bring the Noise, a remake of the old success of Public Enemy, with whom he won the Grammy Awards in the Best Remix category. Since 2012 he has produced songs for world-class artists like Girl Gone Wild, I’m Addicted, and Best Friend for the album MDNA by Madonna and Mika Stardust.

Gemitaiz entered the world of music in 2005 but the breakthrough came in 2012, when the rapper signed a recording contract with ”Tanta Roba”, the label founded by Gué Pequeno and Harsh DJ. His debut album, “L’unico compromesso” (2013), reached the third position in the Italian album charts.His last success was the album “Nonostante Tutto”, released January 22, 2016, again in the first position from the start in the FIMI album charts and certified gold by FIMI just two weeks after its release.

Klingande (born Cédric Steinmyller) is a 25 year old DJ and French producer. His smashing success of 2013 with Jubel, made it possible to export the deep house and tropical house to the public, opening the way to the music genre that since 2015 is doing a master in the landscape of club music and festivas. Jubel, reaching the top position in the charts in Italy, Germany, Belgium, Austria and Switzerland, is the first deep / tropical house single massively streamed on commercial radio, revolutionizing the schedules with refined sounds, sought after and immediately catchy.

Mosey is the son of former French President Nicolas Sarkozy. He describes his style as electronic housy with influences from Rap and R´n´B. His real name is Pierre Sarkozy.

Jay Hardway, Dutch DJ and producer who gained  international prominence when he produced “Wizard” with Martin Garrix in 2013.

Nari and Milani have a very Italian duo that was formed in 1996, evolving from dance to house and EDM. The most recent success has been Atom, released in 2012, which won the title of best track of the year on MTV America.

Tanja La Croix, Swiss DJ, is not only successful on the catwalks (third in Model of The World 2000), but also a great talent to the console. This combination leads to a careful choice of styles and events starting with her appointment as a “musical ambassador” of the Zurich Street Parade to the role of ambassador for the Mercedes Benz campaign in Switzerland. She currently works for FIS events of the Ski World Cup and Fashion TV.

For further information and reservation: http://www.snowland.it/