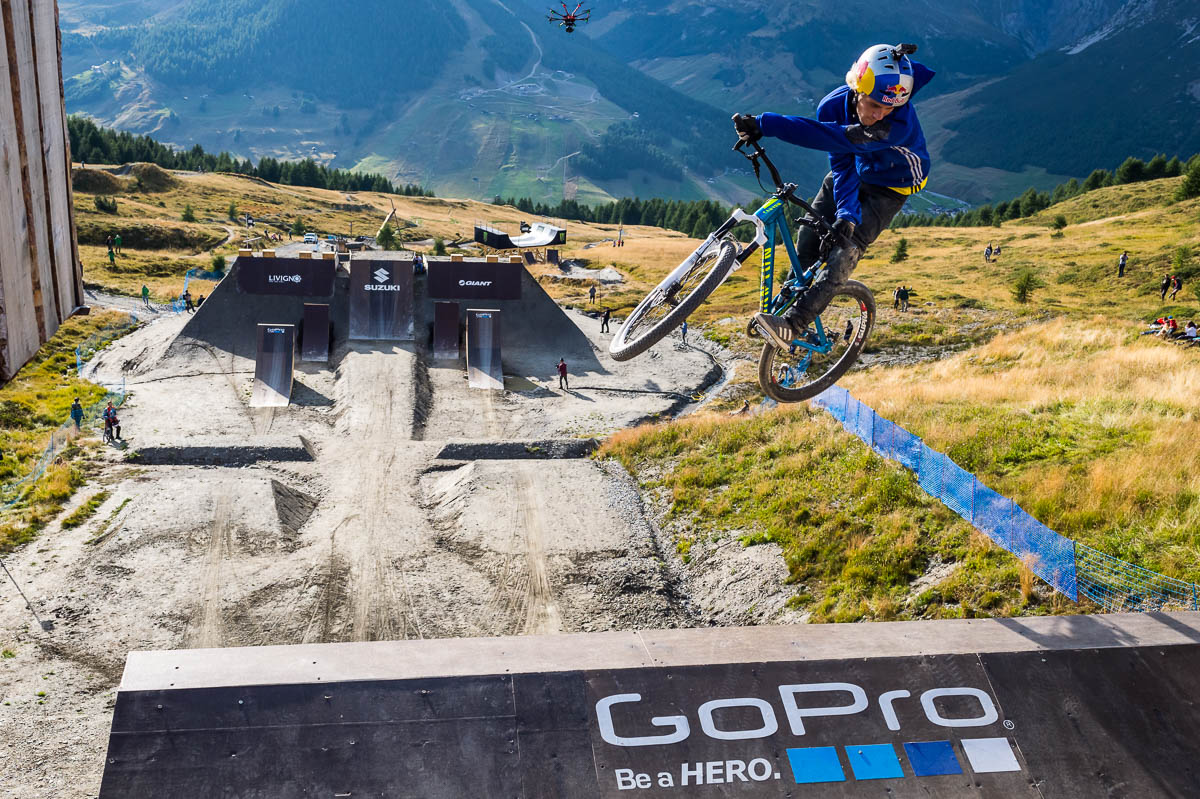 Home Page/Blog/Events/Nine Knights mtb 2015: Diego Caverzasi and Peter Henke are the best knights!
The freeride competition wrapped up a week of incredible film and photo shoots at the Suzuki Nine Knights MTB, a day early on Friday 4th of September in Mottolino Fun Mountain in Livigno, Italy. The jam format contest saw two categories of judging, with Italian Diego Caverzasi grabbing the “Castle Section” win, and the “Full Line” title awarded to German ripper Peter Henke. Stirring things up were the young guns who were pushing the boundaries of mountain biking, in particular Nicholi Rogatkin (USA) who nailed a world first cashroll on his DH bike. 18-year old Adolf Silva (ESP) delighted the onlookers by landing a double back flip, also on his DH bike, his personal first.

“The Full Line”
With some riders investing fully in the “castle section” Henke was one of the riders making use of the whole setup pulling out all the stops, even attempting a 720 on the step-up. He nailed his run right at the end of the session with a run consisting of a drop 360 X-up, a double backflip on the main feature, a table top off the Monster mini ramp, a 360 double barspin, a suicide no-hander, and a 360 flatspin. Fresh back from an injury he was stoked, “I came here to have a great week and to get back on my bike. I did not expect a podium!” In close second place was Sam Reynolds who nailed his smooth run early on and with each drop improving it to stay ahead of fellow Brit Sam Pilgrim hot on his heels.

“Castle Section” (drop tower and main feature combo)
Diego Caversaszi was throwing down since the start of the session, fuelled by home crowds, nailing his winning combo, a backflip from the big castle flat drop and a backflip barspin to tailwhip on the jump. He was one of the few riders dropping the big drop “I was a little scared about the huge drop, but I just turned my brain off and dropped in,” said the up-and-coming rider.  The rest was not a big deal!” Rogatkin who had  already nailed a cork 720 on his DH bike earlier in the week was in close second with his two tricks: a no-hander drop followed by a cashroll. He spent the morning speed checking, and it was worth the wait, “I first learned the cashroll on my bmx bike years ago, then took it to my hardtail and now finally on my dh bike. Couldn’t be more happy to be the first one to land it!” In third place was Henke with a variation on his full run, a drop 360 barspin to double backflip on the jump.

Despite the contest being moved up a day due to weather, the week of the Suzuki Nine Knights MTB saw plenty of progressive action, fun sessions and beautiful sunsets, stay tuned for the highlight edit coming soon, with all the angles and more banger action.